Sivagangai District Athletic Meet was held at Alagappa College of Physical Education on 13th July 2010. In the open category V. Praveen of XII Standard has secured the III Place in the even Hurdles.

In Javelin through V. Manikandan of XII Standard has won the I Place.

In Discuss Throw III Position was won by R.V. Venkatesh of XI B. .

These three students by securing the above positions have got selected for the State Level Meet which will be held at Tirunelveli.

In the Zonal Level Sports Meet held at Puduvayal from 19th July 2010 to 28th July 2010. Super senior boys have been announced as the winners in the following events –

In the events Volley Ball and Kho – Kho our super senior girls were declared winners.

In the event Shuttle Badminton – Singles and Doubles the winners position is won by senior boys.

Senior Girls have won the winners place in the Volley Ball 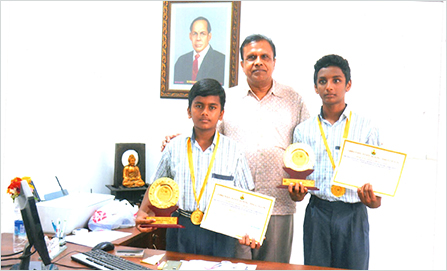 Our chairman Mr.Vairavan congratulated the champions.

In NCC All India Trekking Camp held at Ooty, our student Ms. B. Vinisha of IX standard participated in the National Level Drawing Competition. She stood II in this competition.