Profile of our Founder 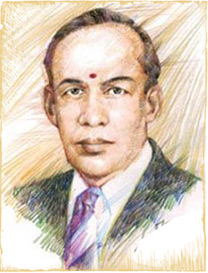 He harbored a firm conviction that education is an absolute must for a human being to become productive, wholesome and humane. His generous donations led to the establishment of the following primary and professional educational institutions:

To bring prominence to the educational institutions he had the vision to convince Prime Minister Nehru to house one of the Government’s National Research Institutes in the heart of the Alagappa campus. As Dr. Radhakrishnan, the Vice President of India surmised at the opening of the Central Electro Chemical Research Institute (CECRI) on 14 Jan 1953.” The magnificent gift of 300 acres of land and fifteen lakhs of rupees by Dr. Alagappa Chettiar helped the Government of India to select Karaikudi as the seat of Electro Chemical Research Institute. Being a businessman himself, Dr. Alagappa Chettiar is aware of the industrial possibilities of our country and the need for scientific, technical and technological education in his lifetime he has built a monument for himself you have only to look around. “

He was a patriot to the core. Apart from actively working with Mahatma Gandhi in supporting the Satyagraha movement, he helped the Government of India by lending his fleet of Aircrafts from his own Jupiter Airways for lifting troops during Hyderabad’s integration. He never flinched or swerved, even when some of his planes crashed in their mission.

• When he died prematurely at the age of 48, Dr. Alagappa Chettiar had redefined philanthropy and contributed more to the betterment of education in Tamil Nadu than any other person of eminence had done until then.

• Perhaps his crowning piece of philanthropy was giving away his own residence in Kottaiyur to found the Women’s college.

• As Rajaji remarked, “Dr. Alagappa Chettiar had given away freely. Students should develop that quality namely giving money earned for charity. Here is a book of life and students can learn from him how one can give to good cause, cultivate courage and emulate the spirit of Dr. Alagappa Chettiar”.